This morning, we took the metro to visit the trainstation.

This trainstation is not like anything you’ve seen before. THe whole station had 11 floors of which the top floor had a relaxing garden with a beautiful view on Kyoto.

From the station, we continued to Nara, which took about an hour to reach.

In Nara, we visited a couple of temples.

First up was the Kofukuji temple, a pretty big temple surrounded by some deer.
On both sides there were also some very nice pagodas. One of them had 3 floors, there other one was even higher with 5 floors.

Then we continued to the Todaji tempel. This is one of the biggest temples containing a 16 meter high statue of Buddha. 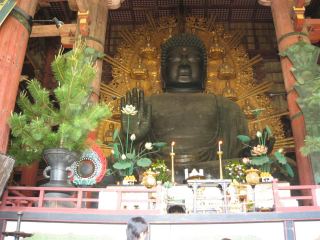 To finish we visited Kasuga Taisha Shrine. This is one of the oldest shrines and a lot of others in Japan are modeled after this one.

Being tired after our long tour, we went for a drink before taking the train back to Kyoto.